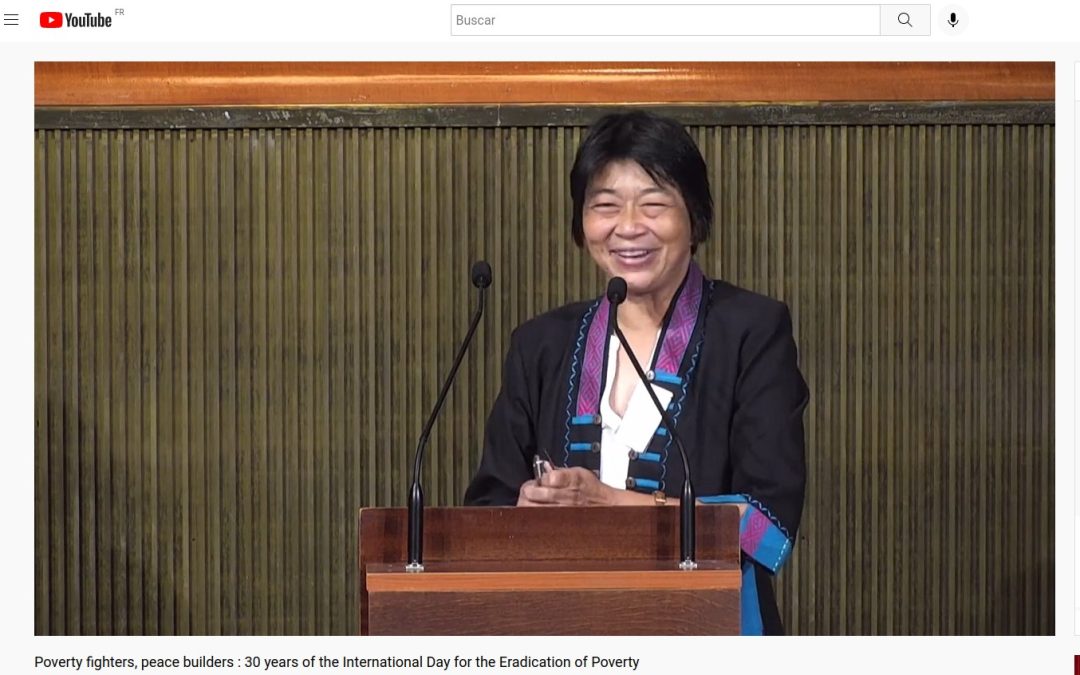 On October 17th, we will commemorate the 35th anniversary of the World Day for Overcoming Extreme Poverty and 30th anniversary of the United Nations International Day for the Eradication of Poverty. In these three decades, we have made significant progress, experienced many setbacks and learned valuable lessons that will help us move forward in the coming years.

We can look back at the past three decades with some pride. We have broken the silence of poverty and people who lead the most difficult lives are being seen and heard. There is more recognition of the central text on the October 17th Commemorate stone which says

” whenever men and women are condemned to live in extreme poverty, human rights are violated”. To come together to ensure that these rights be respected is our solemn duty”..

Previously, human rights were regarded only as “civil and political” rights but over the past 30 years, we have made significant gains in recognising economic, social and cultural rights (rights like housing, health care, education, employment, right to adequate food, and social protection) and more recently the right to a healthy environment, as fundamental human rights. We won it by speaking out, and by raising collective awareness. This is HUGE progress. Another significant progress is the bridge that has been built between development and human rights. Previously, these were two different universes but now, there is increasing recognition that human development and human rights are two sides of the same coin. We see this in the explicit anchoring of the Sustainable Development Goals in human rights. Prioritising “poverty eradication” as the global goal number one has also been a big achievement and with all the natural resources, monetary wealth, and technological knowhow, we can end poverty in all its forms, everywhere.

Over the past 30 years, we’ve experienced many setbacks. A catalogue of crises – from conflict, COVID, to cost of living and the climate emergency – is putting into jeopardy the progress we have made over the past decades. We also know that whenever there is a crisis, the poorest are the hardest hit. The climate emergency constitutes a new violence against people living in poverty and again the poorest communities are bearing the heaviest burden of climate change and the rise in the cost of living. Inequality is on the rise and each year the gap between the rich and poor gets even wider. Whilst millions struggle every day for survival, the past year recorded the sharpest increase in the wealth of billionaires and increase in corporate power alongside erosion of jobs and worker rights. This doesn’t make any sense.

Extreme poverty is not a personal failure, but a collective failure of unjust laws, policies and actions that deny people their dignity and allow extreme poverty to persist. In looking to the future, we need to transform unequal power relations and unjust systems. We need to understand poverty in all its complexities and go beyond purely monetary and deprivation measures of poverty to include the hidden dimensions, the relational dimensions – the stigma, the shame, the institutional maltreatment that causes suffering of the body and minds of the poorest in our societies. To be effective in poverty eradication strategies, we need to merge the existential, experiential and academic knowledge of people with lived experiences, professionals working with them and the academics. We have seen the failure of social protection systems in reaching the people most in need.

In moving forward, we have to go beyond listening to those living in poverty and ensure that they become genuine partners in development – where their contributions are valued, where they have a proper place in the research teams and a seat where decisions are made. They must be involved in the design, monitoring and evaluation of policies that directly affect their lives. Only then, will we have poverty eradication strategies that will deliver to those who have been left behind.

Our experience of October 17th has been that of making the impossible become possible. As we look to the future, we must carry the meaning and spirit of October 17th with us every single day of the year. We need to expand the political, social and economic spaces of the poorest in our societies as well as the intellectual and cultural spaces. In the coming decades, let us talk – not of exclusion but of inclusion and not of neglect but of care – not of poverty but of WEALTH. Let the coming decades be about demonstrating the wealth of solidarity, celebrating wealth of wisdom and talent and let us make that commitment for social justice, peace and the planet and let us join hands, work together to achieve wealthier, healthier, happier communities – a world where dignity in practice is enjoyed by all.